Winter is well on its way and we are all into the new year. Friends, family, co-workers, and maybe even you have already fallen sick this winter. Illness spreads rapidly, so once one person is sick everyone around them seems to get sick shortly after. You may be diligent with your flu shot, vitamins, anti-bacterial hand products, and immune-supporting supplements, but that doesn’t mean you’re in the clear. The below four illnesses are considered very common with each one having more than three million cases per year. In a room where you have painted with Activa, Activa obliterates these four common illnesses.

If you’ve had the flu, you know you don’t want to have it again. Fevers, chills, body aches, cough, and congestion are among the most common symptoms, but other more severe symptoms can wreak havoc on those who are at high-risk. Children under 5, adults over 65, pregnant women, women up to two weeks postpartum, those with chronic illnesses such as asthma, heart disease, kidney disease, liver disease, or diabetes, and those with a BMI higher than 40 are considered to be at high-risk.

One common way the flu spreads is through airborne respiratory droplets (coughs and sneezes). This is where Activa comes in to obliterate the influenza virus. If your home, office, or school is painted with Activa, your risk of catching the flu is minimized. Activa is antimicrobial which means it destroys microorganisms such as bacteria, viruses (the flu!), protozoans, mold, and mildew. Due to Activa’s photocatalytic properties, it destroys a majority of viruses on contact when the air passes by a surface painted with Activa. This reduces the risk of the flu virus spreading through airborne respiratory droplets.

Pneumonia is an infection that causes inflammation in the lungs by filling air sacs with fluid or pus. It can be caused by bacteria, fungi, parasites, or viruses. Those with pneumonia suffer from coughs filled with phlegm or pus, fevers, chills, and may have difficulty breathing. With over three million cases diagnosed per year, it is considered life-threatening to infants and adults over 65. Antibiotics and vaccines can treat some forms of pneumonia, but not all.

Activa can help obliterate bacteria, fungi, parasites, and viruses that cause pneumonia. Pneumonia only spreads through airborne respiratory droplets which means that any surface painted with Activa will help destroy these infection-causing microbes. You can protect your family at home by painting with Activa!

Speaking from experience, strep throat can be one of the most painful illnesses to endure (although, I haven’t had pneumonia before *knock on wood*). On top of having a throat that aches ferociously just from breathing, you have a nice cough to irritate it some more. Strep throat is another illness that is caused by airborne respiratory droplets, as well as sharing saliva. It’s a bacterial infection and requires medical intervention to get rid of. Even though it’s bacterial, Activa can help fight against its spread! Just like the flu and pneumonia, when the strep throat bacteria flow across a surface painted with Activa, Activa’s antimicrobial properties will help eliminate it.

We saved the most common illness for last, because everyone has had a cold. It’s certainly not fun, but it is less mild than the other three illnesses mentioned in this blog. Colds can range from being mild, where you might have a little sniffle, to severe, where you have a fever, cough, congestion, and more. This is because colds don’t stem from one type of virus, they can be caused by many. Good thing Activa doesn’t discriminate against which viruses it destroys! Common colds can spread through airborne respiratory droplets, which is one of the most common ways it spreads due to the coughing and sneezing it causes and Activa’s antimicrobial properties can help eliminate it from the air.

Remember to wash your hands frequently (especially before eating, or touching your eyes, nose, or mouth) to help protect against these four common illnesses from spreading. Handshakes, hugs, even touching a door knob that a contaminated hand touched can spread the illness to you. If you’re sick, make sure to cover your coughs and sneezes in the crook of your arm or in a tissue to help prevent against their spread through air. Extra precautions should be taken around those who are considered most vulnerable.

While this winter is nearly half over, many of us have fallen ill to one of these already. Activa can help obliterate microorganisms from spreading through the air, giving you a higher peace-of-mind in the spaces you occupy. Activa should be used in schools, nursing homes, office buildings, stores, malls, and at home. Not only will Activa help prevent the spread of these common illnesses, it reduces pollution and is self-cleaning. It’s not too late to paint your home (or other) with Activa. Protect your family, friends, co-workers, and loved ones today. 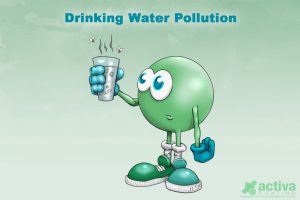 Drinking water pollution is a topic that needs to be[...] 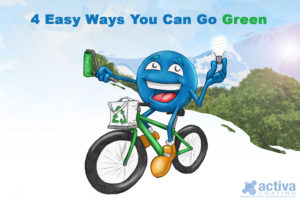 4 Easy Ways You Can Go Green 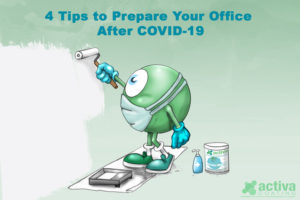 4 Tips to Prepare Your Office After COVID-19